r History - Hidden Cave Ranch......... The most unique place to stay in Kentucky
Skip to content 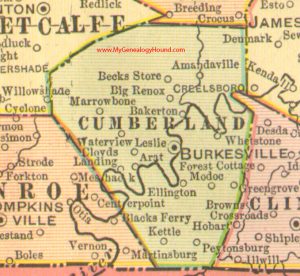 The first title of land in what is now Cumberland County was deeded to settlers by the Iroquois Indians in 1768. Cumberland County was formally organized in 1798 as the thirty-second county of Kentucky, landing on the state records officially in 1799. It received its name from the Cumberland River, which flows through it from one end to the other. A small settlement had already started along the banks of the Cumberland River. In 1846 this settlement was incorporated as the City of Burkesville, named after Isham Burk, a prominent citizen leader at that time.

In 1829, while drilling for salt, an early settler struck oil on Renox Creek, three miles north of Burkesville. It is generally believed to be the first gusher hit in America. This oil was bottled and sold as medicine in the United States and England under the trade name "American Oil." A historical marker has been placed at the site.

In the War of 1812, General John Edwards King of Burkesville commanded the Third Brigade in the Battle of Thames. At this time General King was about fifty-five years old and was Circuit Court Clerk of Cumberland County. His home was on Hwy. 61 near the city limits and was later the home of the Cheek family, originators of Maxwell House Coffee.

The Civil War brought a great deal of fighting in Cumberland County since the Cumberland River served as a major natural barrier between opposing forces. Union and Confederate forces as well as guerillas lead by Champ Ferguson were active from time to time in the county. General John Hunt Morgan made several raids into Cumberland County.

Thomas Lincoln, father of the 16th President, served two terms as constable of Cumberland County from 1802 to 1804. Two former governors of Kentucky, Thomas E. Bramlett and Preston H. Leslie, were both born in Cumberland County.

Burkesville became a busy river port during the latter part of the nineteenth century, serving a large area at a time when water transportation was the only feasible way to move large quantities of goods in and out of the territory. The last steamboat docked in Burkesville in 1929, which was the year after the first major road was opened to the larger city of Glasgow, forty miles to the west.

Cumberland County, as well as the surrounding area, is rich in heritage and small town charm. The breathtaking natural beauty of this area was noted by naturalist and"Father of Our National Parks", John Muir. In his famous Thousand Mile Walk to the Gulf wrote, "Burkesville, in beautiful location, is embosomed in a glorious array of verdant flowering hills. The Cumberland must be a happy stream. I think I could enjoy traveling with it in the midst of such beauty all my life."